Most girls he encounters

Billy! We're going on a cruise!SHIPWRECK'D

Shane is the main dueteragonist of Billy's Toon Time. He is Billy's best friend and the owner of Pinkie.

Shane is the one of the main protagonists in 'Billys Toon Times'. He comes up with a lot of the adventures the group goes on.

Shane is the adventurous one of the group. If there is adventure to go on, he's the first out the door. Shane owns a pink, formerly white, sheep named 'Pinkie', which he bought from a farmer in 'Done Deals'.

Shane has light brown hair, light teal eyes, and is likely average height, although revealed as being at least shorter than Adam.

He wears a grey hoodie over a blue T-shirt and under a dark grey jacket, jeans, and grey sneakers.

His Season 2 design does not show any distinguishable differences between his Season 1 design.

Shane is very optimistic and friendly, and he often invites random people to stay if they need a home. He's a flirt around girls, and girls are one of his weaknesses. He loves his pet sheep, Pinkie, and adored when his wool color was "dyed" pink. He often decides the adventures that the team goes on. He seems to be advanced in history, as he was able to redecorate the ship featured in SHIPWRECK'D to match historical pirate ships. 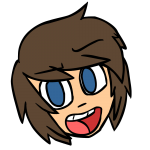