I Don't Mind if You Don't Mind is an episode of Billys Toon Times. It's the second-most viewed episode of the series, with 4,110 views. It mostly focuses on the main 5 (discounting Adam, but counting Pinkie) switching bodies with each other.

After the intro, Billy, Shane, Gavin, Philip, and Pinkie are all seen walking on the street. After about 3 seconds, Billy asks Shane if he has any ideas for an adventure. Shane, for once, does not have any ideas, but suggests that Pinkie might. Billy questions this, but Pinkie chooses to go down a dark alley. Shane turns to go down the alley, and Philip doubts Billy's decisions to let Pinkie lead, to which Gavin suggests Shane is a sheep whisperer. Billy doubts it, and the team decides to follow Shane.

Shane bumps into a large wooden chest, much to Gavin's surprise. Billy observes it, and Philip pulls out six C4's, attaches the to the chest, and blows it open. Orb appears, and causes them all to switch bodies. Billy is shown to be knocked against a wall, causing him to black out.

Billys talks about how it's weird to be in Shane's body. After Billy claims that they need to find where the orb thing went to, Adam passes by, and asks them what's up, to which Billy snaps at him and tells him they're a "little busy here". Adam simply smiles and tells them he's going to go have a sandwich. Billy makes a plan to where everyone will look for the orb: Billy will search their house, Shane will search the park, Gavin will search the arcade, and Philip will have to go with Pinkie to the zoo, due to him being a talking sheep.

Billy looks around for the orb, but cannot find it. He gets distracted by seeing he has messages on his computer. He originally says he's simply taking a quick look, he decides to do some animating as well.

Shane, who is at the park, sees the Annual Dog Show, and goes to watch it. The host of the event notices who she thinks is BillyBCreations, and offers him a place on stage to watch the show. Shane questions if she meant him, to which she happily responds she did. Shane accepts her offer.

Gavin, who went to the arcade, claims he has to keep a look out for the orb, but deicdes to play a game to pass the time. He discovers a game called "Earth Edge", which he claims could keep him occupied forever.

The screen shows Gavin, who is playing Earth Edge. A hand grabs him and turns him around. Three members of a gang are shows, their leader seeming pleased to have found "Philip", and told him about how he shot up their crew. Gavin denies the act, claiming he does not own a gun. Two guns fall out of his shirt sleeves, much to his dismay. He is hit over the head with a frying pan, knocking him unconscious.

Warehouse 74 is shown, and Gavin is seen tied to a support beam and being forced to look at cute cat pictures, which causes him pain. The leader laughs and tells him that he's preparing him for the bullet through his head he'll receive. Gavin asks if that's too violent for the show, to which the leader shrugs it off with a simple "nah", before pointing a gun at Gavin's head. Fortunately, Philip and Pinkie enter, and Philip shoots the gang, and punches their leader in the face, then proceeds to untie Gavin. Gavin thanked him for saving his life, and Philip accepted the thanks, and added that Gavin's still in his body. Adam, who was there to get a sandwich, simply stares at the scene.

The main 5 all reconcile, and claim they have not found anything hinting at the whereabouts of the orb. Billy has an idea. He pushes his friends over to the chest, and acquires a "Fonta" soda. He pours it into the chest, causing the orb to emerge, distressed. Billy threatens the orb with the soda, causing the main 5 to be put back in their bodies. The orb seems upset about the state of where he lived. Shane and Billy allow the orb to move in with them.

Cut to nighttime, Billy reminisces about the adventure, and wishes everyone, including the orb, a good night. The orb starts to glow and laugh maniacally, marking the end of the episode. 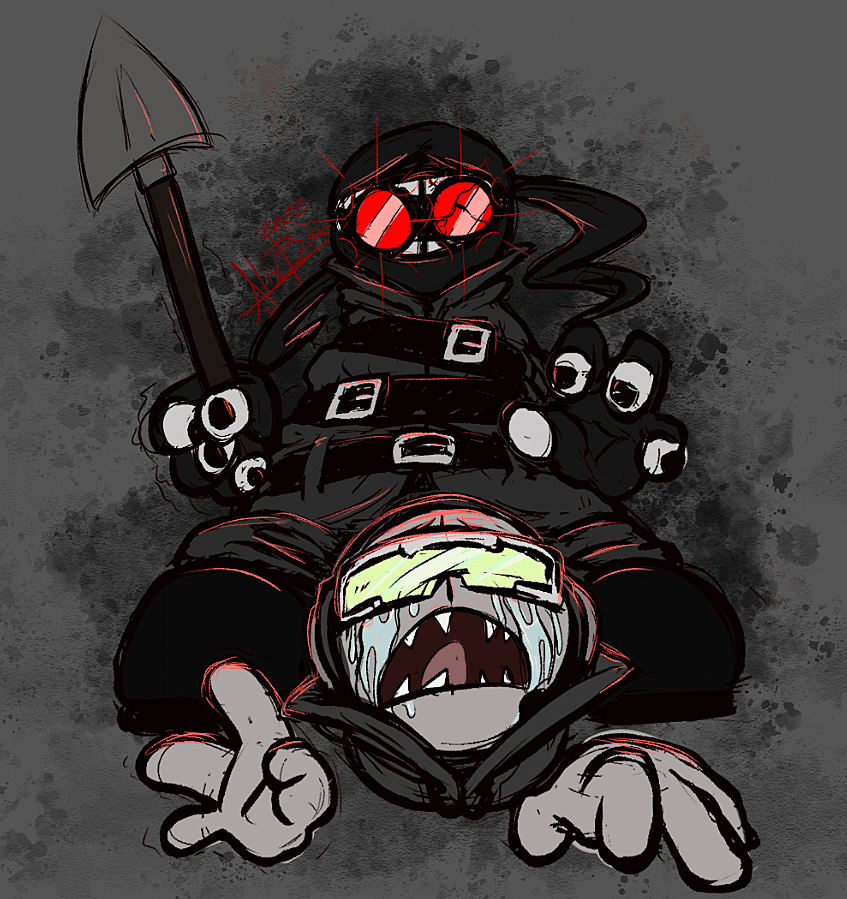