The Dog Show Host was a one-time character that appeared in "I Don't Mind if You Don't Mind. She appeared to be a fan of BillyBCreations, and she was voiced by Anna Kingsley.

The Dog Show Host has short golden blonde hair with a salmon barette in it and light teal eyes. She wore a purple shirt with white sleeves, jeans, and pink shoes. 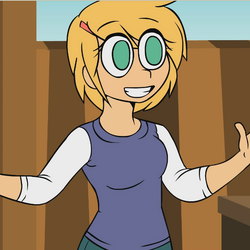 Retrieved from "https://billys-toon-times.fandom.com/wiki/Dog_Show_Host?oldid=4700"
Community content is available under CC-BY-SA unless otherwise noted.