Alfred was a one-time character that appeared in "The Hallo-Weenies Part 2", as Batman's butler. He was voiced by Billy Crinion.

Alfred is an elderly man with grey sideburns, a bald head, and wrinkles. He wears a tuxedo and monocle, and his eyes were always closed. 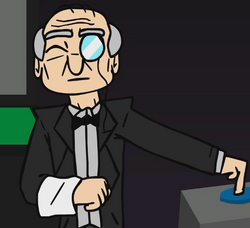 Retrieved from "https://billys-toon-times.fandom.com/wiki/Alfred?oldid=4698"
Community content is available under CC-BY-SA unless otherwise noted.